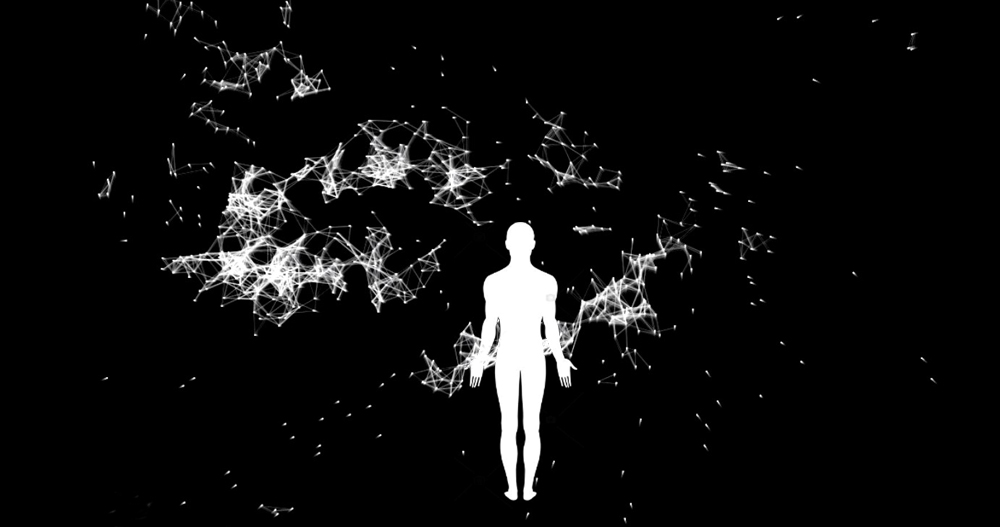 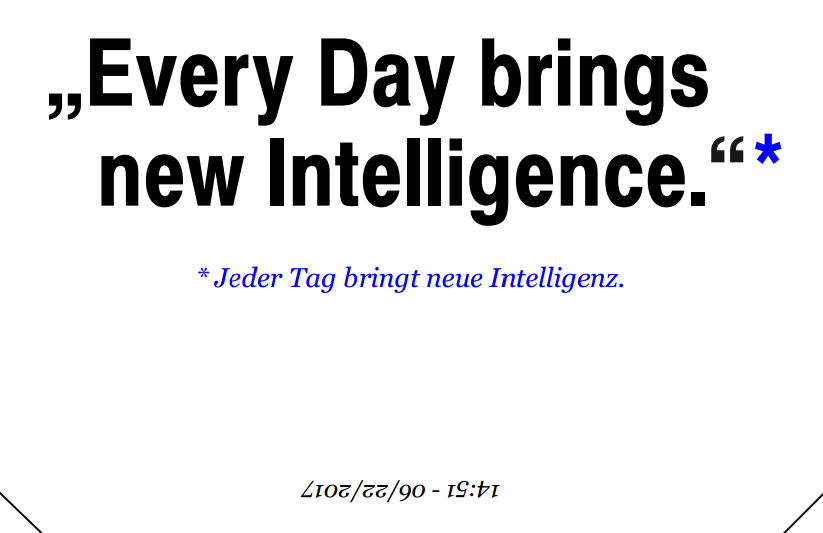 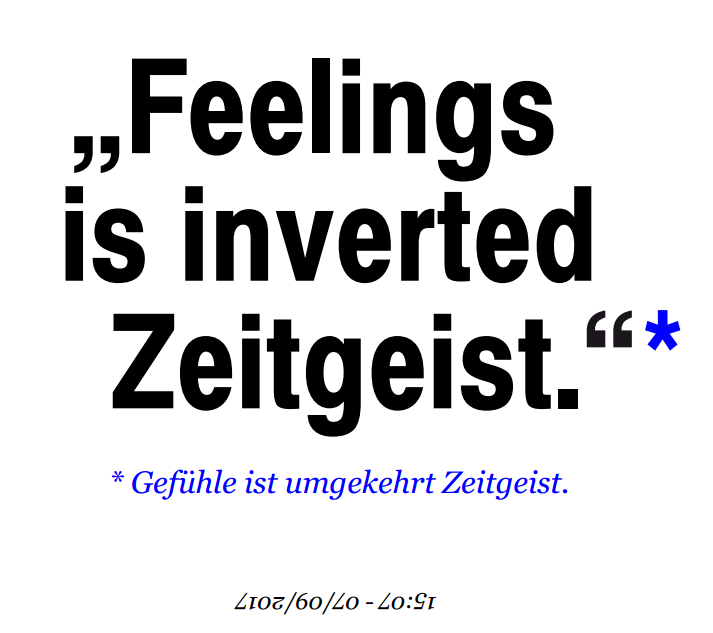 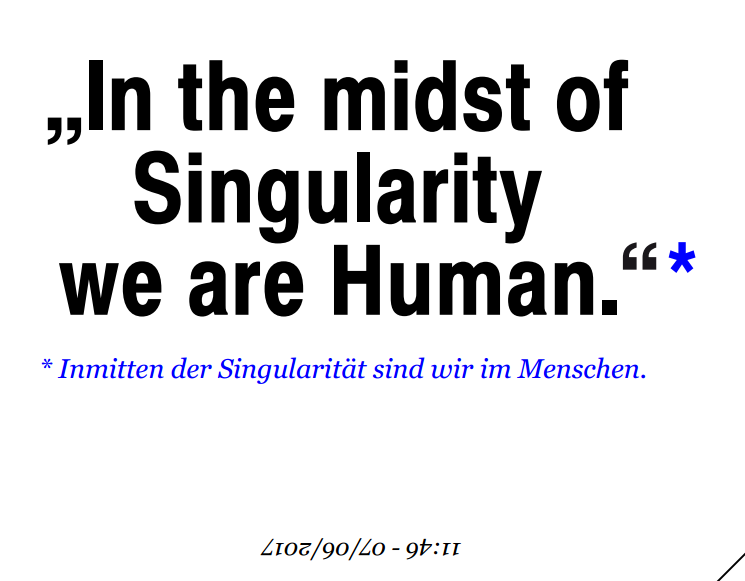 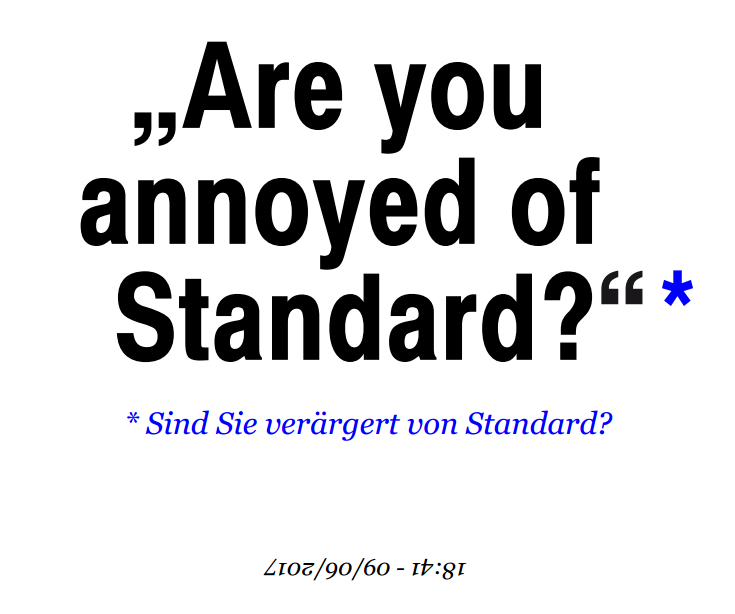 Do you have some idea of what the artificial intelligence might be thinking right now? What responsibilities should machines take on? Imagine a world full of intelligent machines. What role would mankind play in this possible future world? The project {Ghost} invites us to explore this exciting, yet also disturbing question. 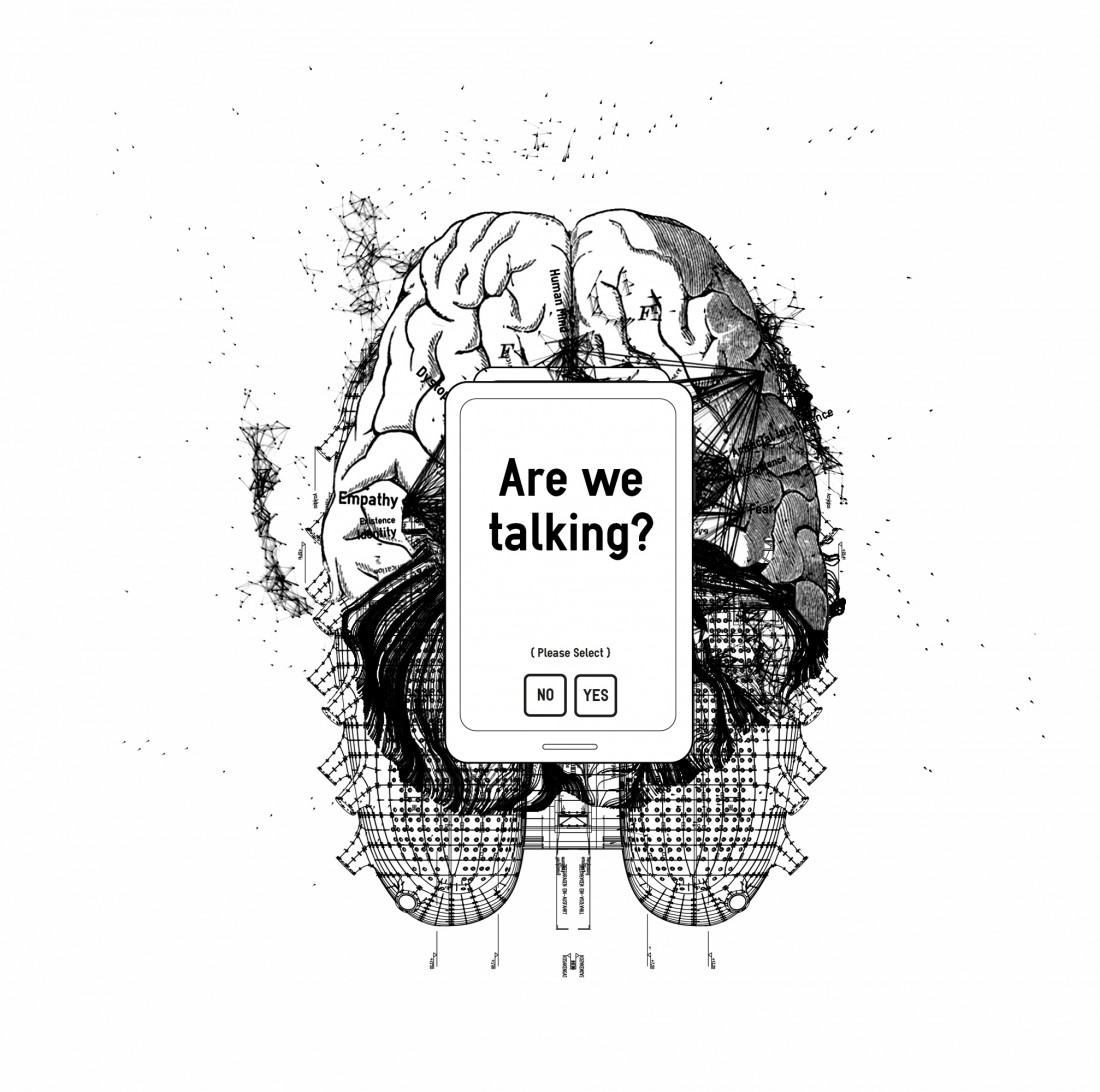 {Ghost} is an artificial neural network, that inhabits Kunsthaus Graz since July 2017. It it is shaped by online text information derived from the Kunsthaus Graz itself and through the participation of their human audience.
A simple web app allows the dialogue between the AI and the public, while [{Ghost}] will also be connected to the media façade of the Kunsthaus Graz. The BIX façades create a projection in public space of the current status and developments of {Ghost} in the form of visual patterns and brief, small sentences, called Truisms. The project was curated and initiated by Elisabeth Schlögl and Dr. Barbara Steiner. 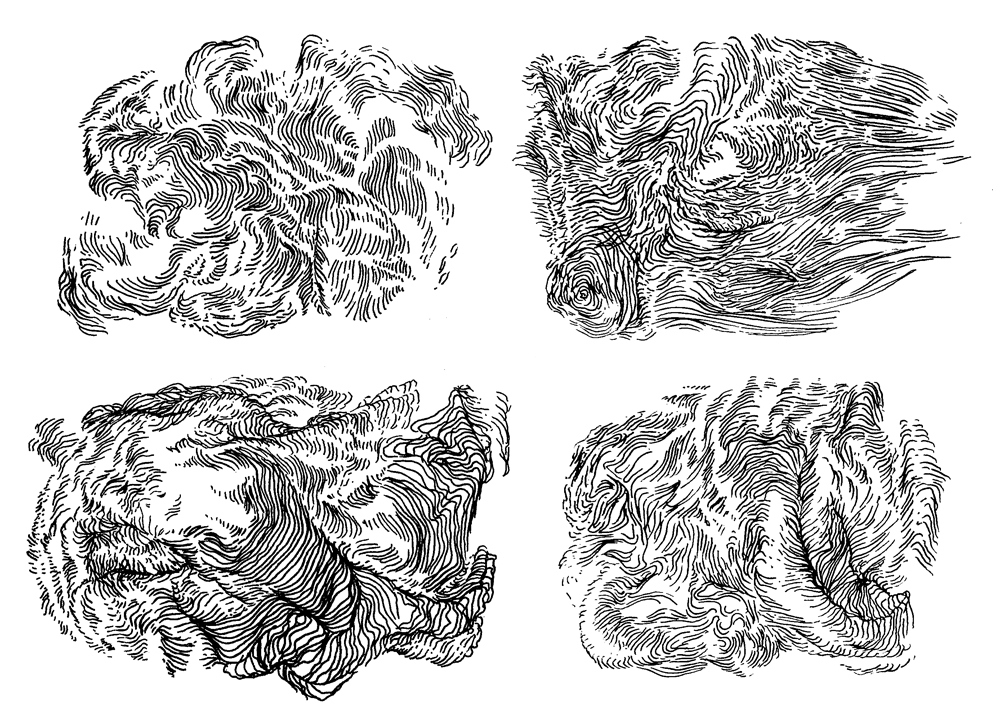 flow sketches from flat to high turbulence – inkpen on paper 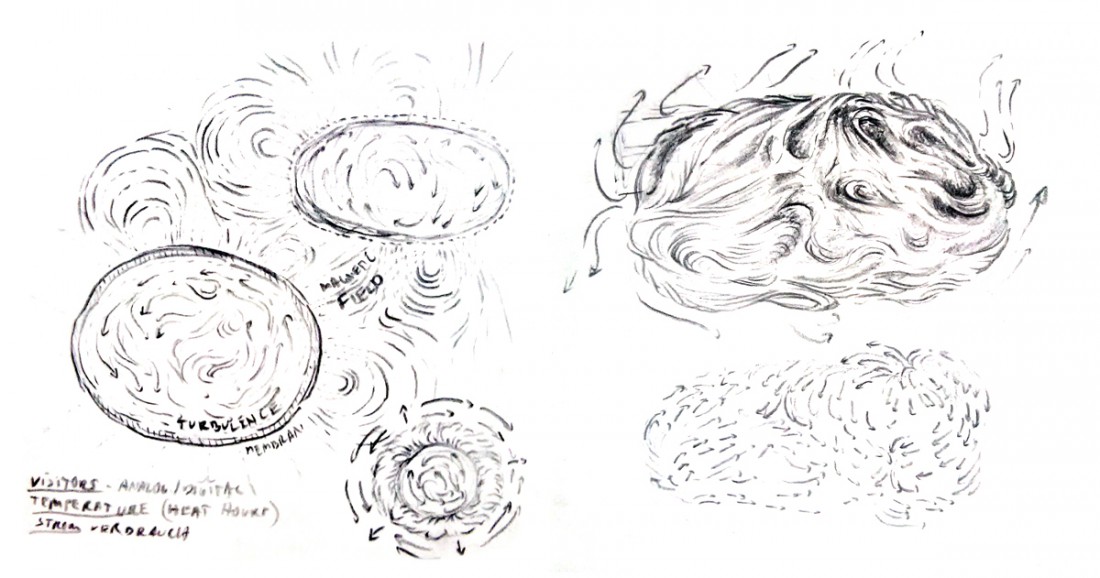 the form as a consequence of dynamics of physical forces

flow sketches merging the hull of the Kunsthaus Graz

What are the basic elements of Ghost?

The core of the Ghost is an artificial neural network of neurons and synapses – simplified according to the model of our brain. The neural network of Ghost can be imagined as a constellation of many slogans. These slogans and their connection to one another are therefore decisive for the kind of „knowledge“ that is stored in the neural network.

How does the Ghost work?

All captured texts are processed from ghost to keyword clouds and added to the central web, its „memory“. The Ghost also has routines to automatically sort this information.

Only by interacting with the environment is an organism as „alive“ or „survivable“. Therefore, a special value is placed on the interaction with the users: they interact in a direct dialogue with the neural network of the ghost and generate or update their neuronal structure with their interactions. {Ghost} is thus subject to a steady change, a continuous learning process that can create new connections, but also delete redundant information. 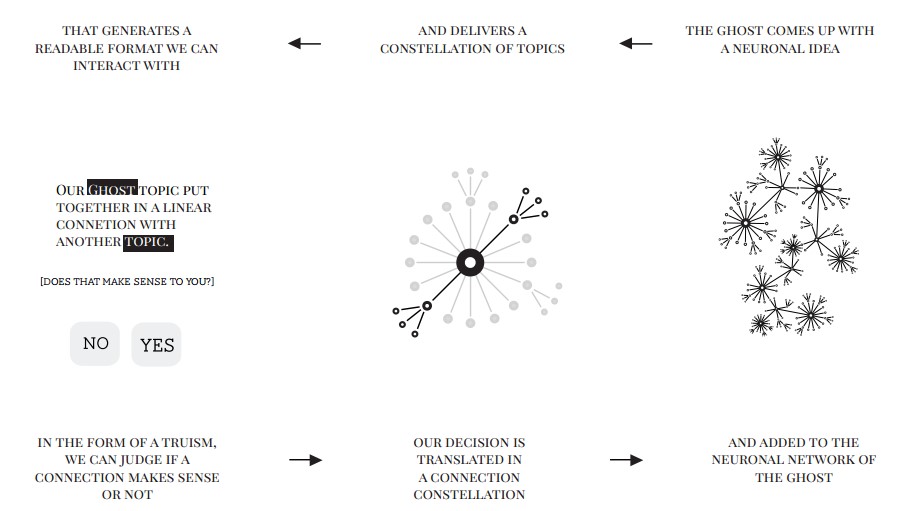 The specially developed interface to the neural network of the Ghost is a text-based application. This app deliberately uses the resources of text as the basis for communication in order to create as few barriers as possible. By means of the application, the user is able to carry out modifications on the neural network of the Ghost by means of a text-based dialogue. This includes the expansion of the vocabulary, the removal of redundant information and above all the useful linking of the information / neurons of the Ghost. 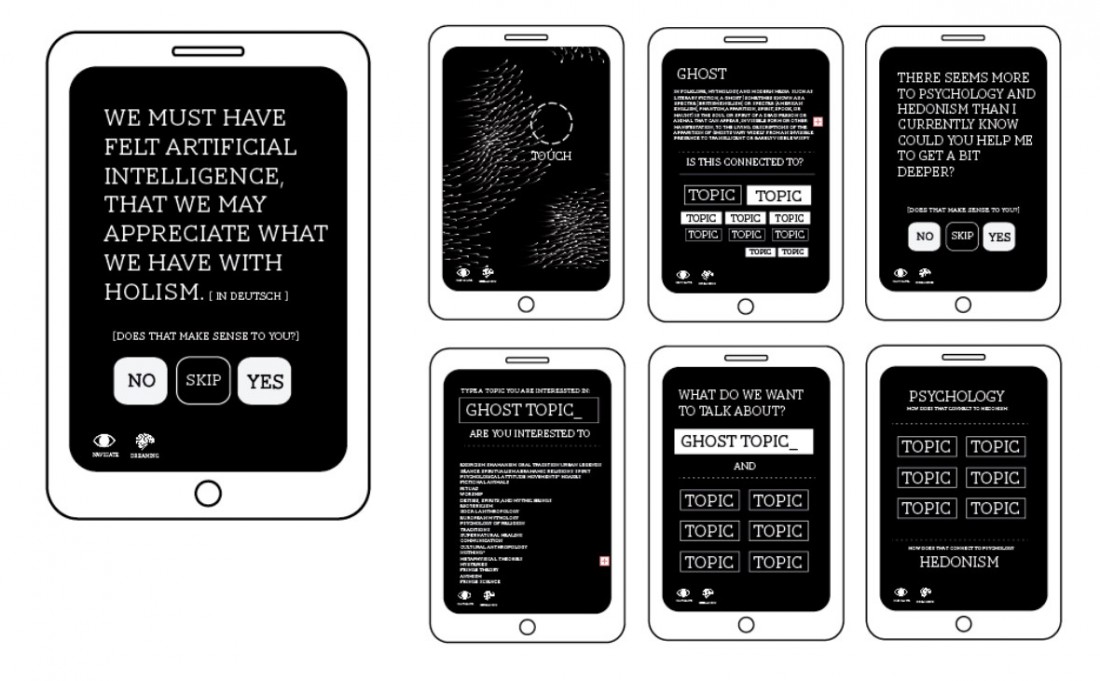 The inside, the outside and the membrane

Ghost is a metaphysical digital creature, which has temporarily transformed itself around and in the Graz Kunsthaus. Its origin is the metaspace, which permeates all known matter, argues it, but can never be assigned to a place. We regard ghost as manifestation, as being between the worlds. Therefore, we can create exciting connections to the familiar sizes of interior and exterior. If we consider the Kunsthaus as the body of an organism, the covering becomes the membrane, the interior of the house becomes the internal part of the body, and everything beyond the skin becomes external. This triple version allows manifestations of the ghost, which can give us new experiences and thus discoveries about the digital world. The application is the correspondence for the outside, the communication interface to the environment, the VR system as a tool for exploring the organic life of Ghost and the BIX façade as a membrane, which separates the two areas from each other. 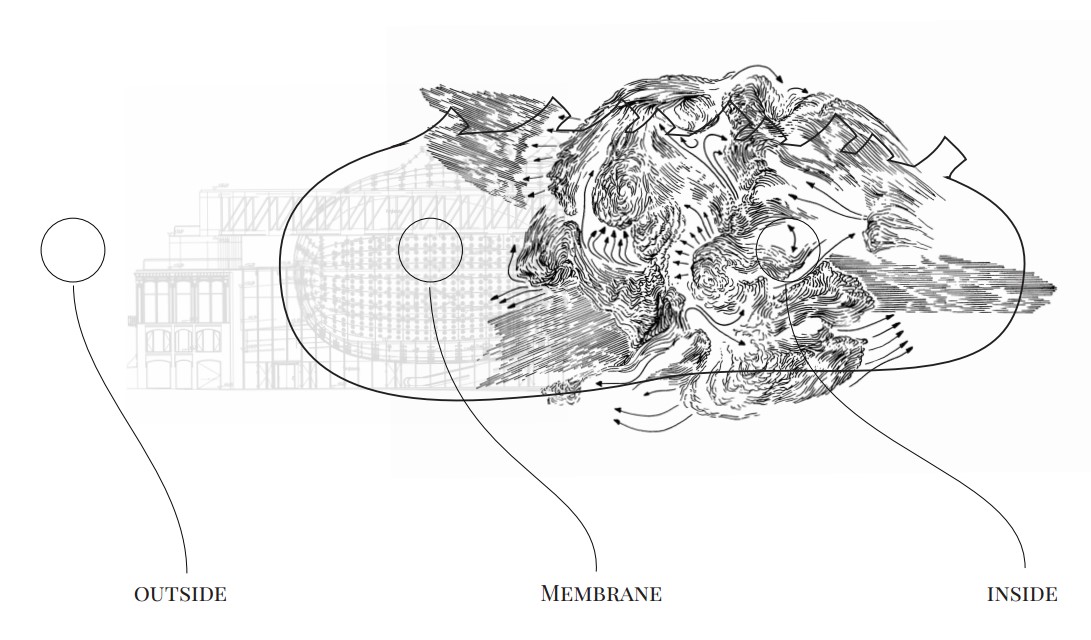 Ghost is able to dream and develop own ideas which will be readable for us. During a dream cycle the neuron structure of the Ghost is fired and delivers „ideas“ H. Conceptual combinations that reflect direct deductions of the current neural structure – similar to the tramp process we humans experience. From this dreaming process, rebellious truths arise: assertions, comparisons, definitions, poetry, or whimsical arrangements that formulate ghost sentences. Both the trapping process and the reverb truths are constantly manifested on the façade within one cycle. From individual impulses arise clusters, which form to a constellation, condensate and form a sentence. Then the dressing dissolves to order itself again in another form.

Digital Sketches of the Dreaming

All the knowledge of the ghost circulates and passes through its metaphysical aura. This aura passes through the matter of the Kunsthaus and is bundled in its center. Just as in biology, laws are different in the interior of a body than in the outside – that means, above all, that other interactions are necessary in addition to the representation. We are in the digital body itself, in its functional system – we disappear in our physicality and appear as metaphysical observers. The metaphysics of the impulses that circulate within this digital body follow their own dynamics and order – events of origin, movement and decay are observed. We are in an open space, a dimension between zero and infinity, in the distance plays no role. At the latest at this time, it is clear that the visitor can only arrive at a realization of a whole by interacting with this digital dimension. 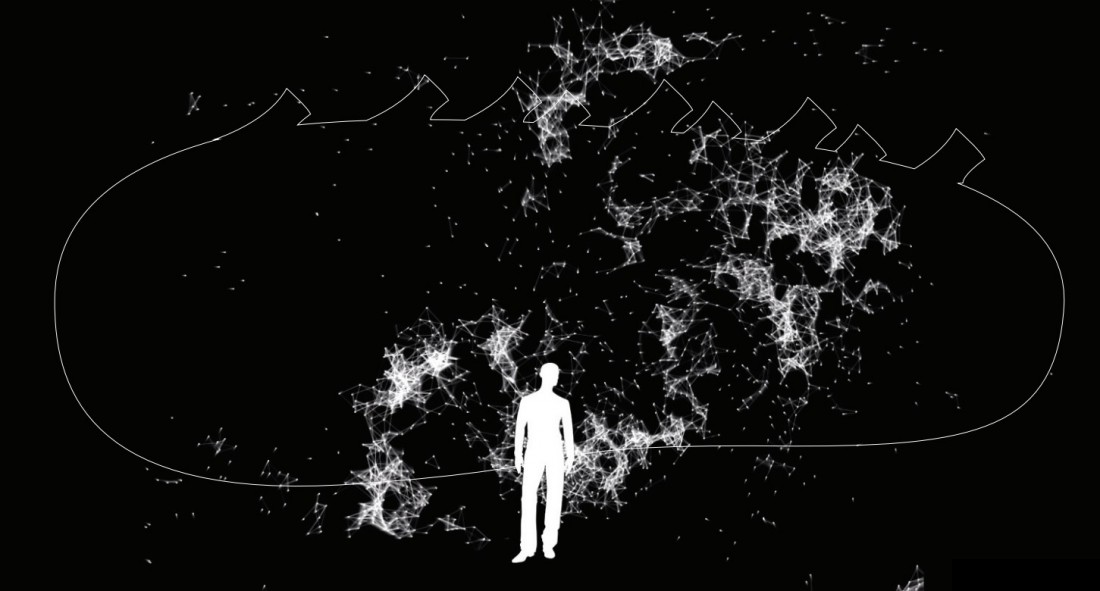 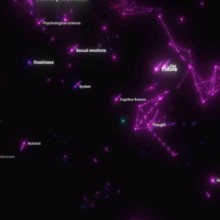 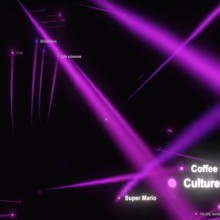 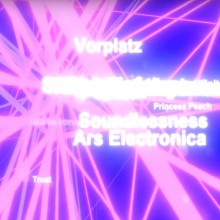 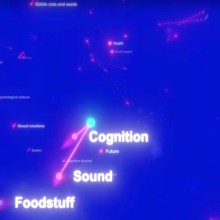 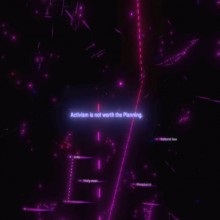 In cooperation with GameDev Graz and TU Graz we created a one day event at the Space02 of the Kunsthaus Graz. Therefore contemporary positions in VR were presented to try out along education, game and art. 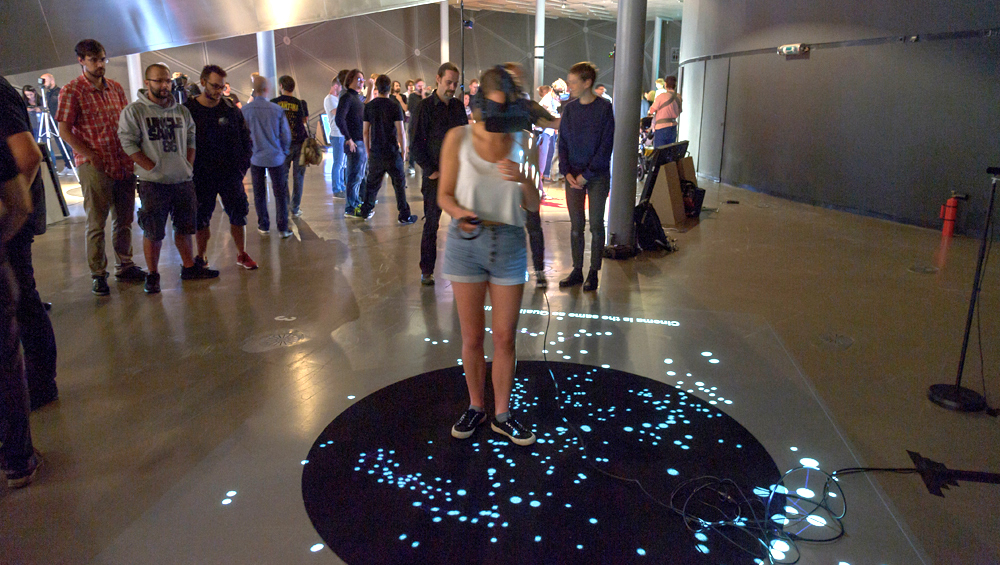 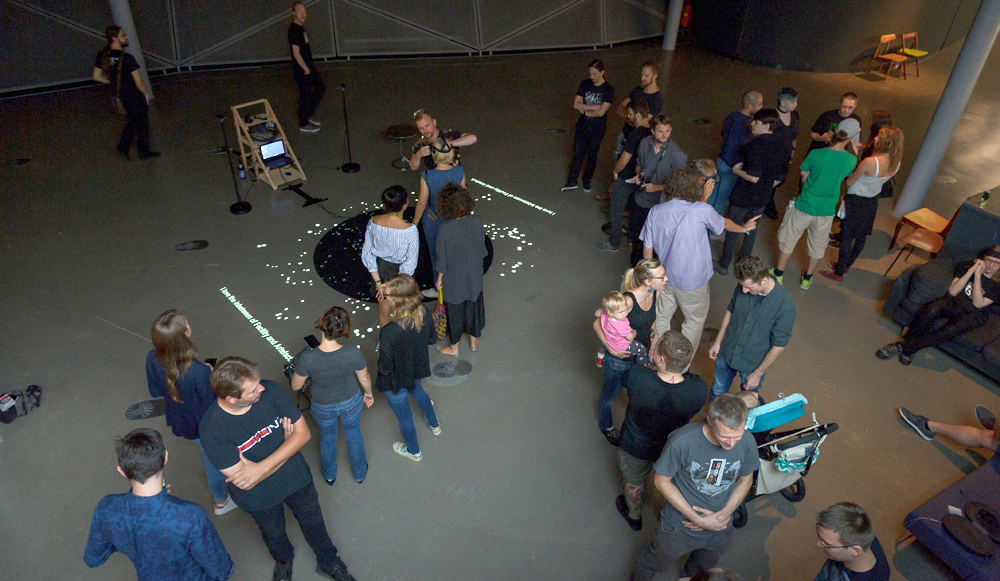 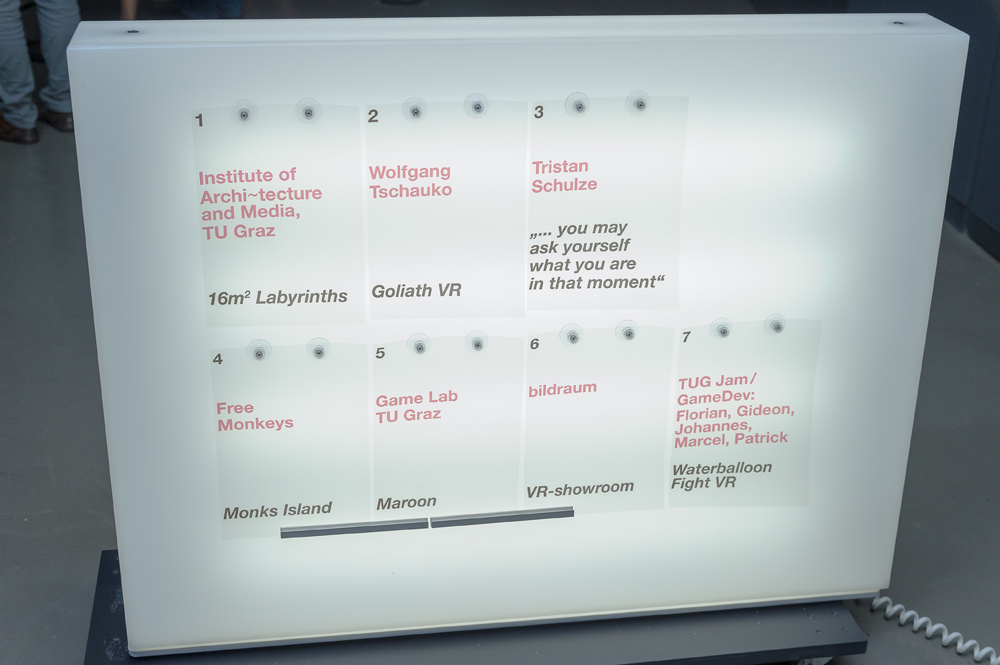 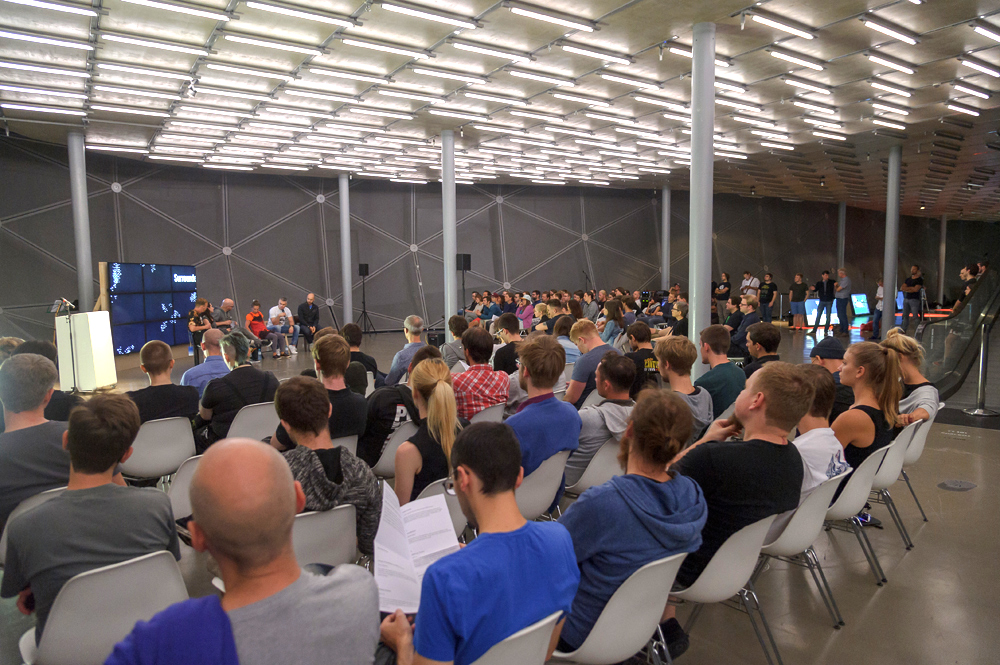 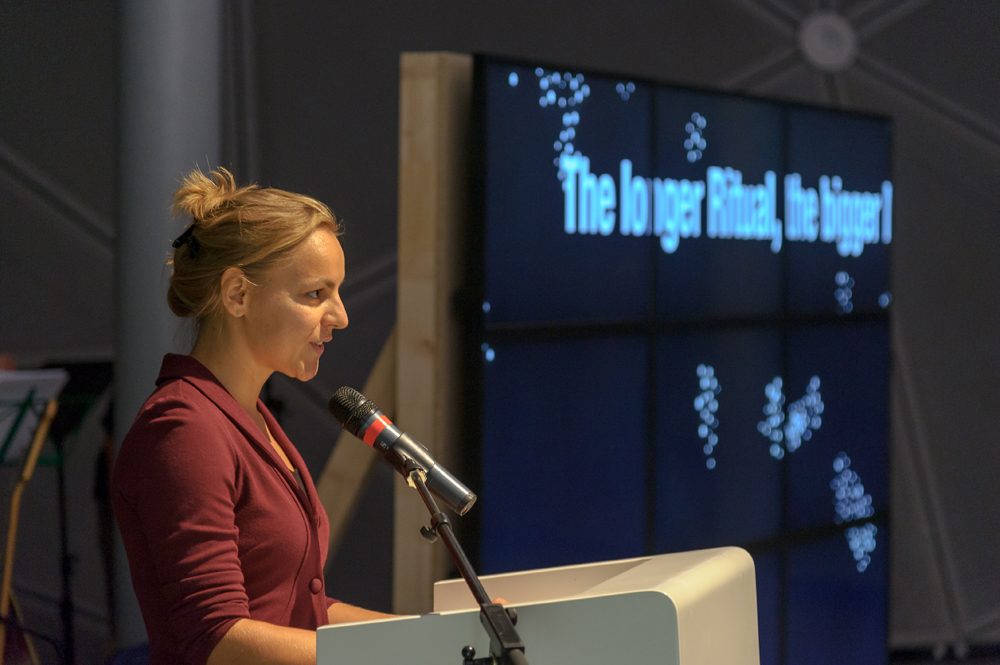 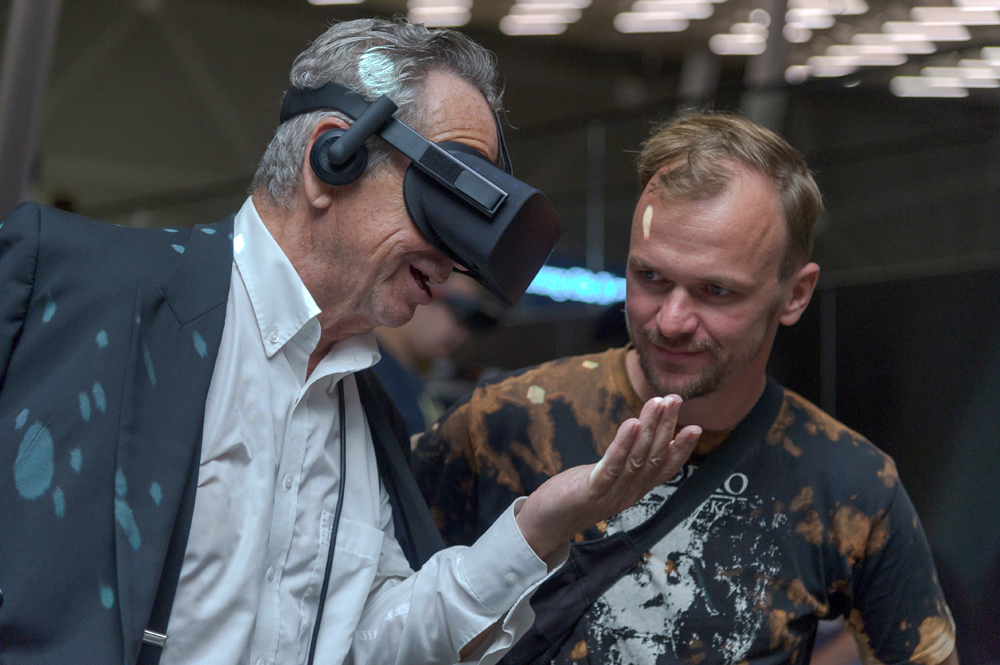 For the duration of almost half a year, {Ghost} will be connected to the BIX facade of the Kunsthaus Graz. Therefore it will share its recent „knowledge“ and status.

For the duration of the 2017 ARS Electronica Festival {Ghost} appeared both at the facade of Kunsthaus Graz and the ARS Electronica Center in Linz. Beside the enhancement of the visuals into a RGB color spectrum an audio layer was added too.


triŞtคຖ Ş¢hนlຊē is an online collection of projects made by Tristan Schulze - artist, designer, coder, you name it :) . This collection includes concepts & prototypes and finished pieces. Tristan Schulze's works are shown in a wide variety of contexts and at international locations in an artistic and creative context.